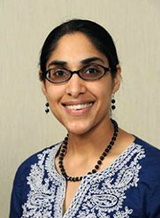 Puneet Sahota, MD, PhD is an anthropologist and a physician, and has worked with American Indian/Alaska Native communities for nearly two decades. After graduating in 2002 from Northwestern University summa cum laude, Puneet completed a year-long epidemiology research fellowship at the National Institutes of Diabetes, Digestive, and Kidney Diseases in Phoenix, AZ. There, she helped conduct a study of depression and diabetes among American Indians in the Southwest. In 2003, Puneet entered the Medical Scientist Training Program at Washington University in St. Louis as an MD/PhD candidate in anthropology. For her PhD dissertation (fieldwork conducted from 2006-2008), she examined the relationship between a Southwest American Indian tribe and biomedical/genetics research, including ethical, political, and cultural issues. She also assisted the tribe in developing its own research regulation policy and board. This work was funded by grants from the National Science Foundation and the Wenner-Gren Foundation. Puneet received her PhD in 2009. She has applied the lessons learned from her dissertation to national contexts for advocacy and research. During Puneet’s graduate work, she collaborated with the National Congress of American Indians in Washington, D.C. As a post-doctoral fellow and research fellow there, she conducted a study on suicide prevention approaches being used across American Indian/Alaska Native communities, and also wrote policy papers on research regulation, health care reform, and genetics research. Puneet is also the medical director of consultation-liaison and emergency psychiatry at Cooper University Hospital in Camden, NJ.